CrossFit Omnia’s garage door is open. Music pumps through the air and you can hear the slamming of weights from inside. A couple dogs wander around the entrance, comfortable, like this place is their second home.

For the members of the CrossFit Omnia team—headed to the Games for the second year in a row—this place really is their second home. Other than work (they all work separate full-time jobs), the box sees most of their heartbeats, maybe even more since, you know, when they’re here they’re working out.

Kelly Stone is new to the team this year. A doctor of physical therapy who swam Division One at the University of San Diego and grew up doing competitive gymnastics, she’s only been doing CrossFit for a year and a half. This year, she qualified for Regionals as an individual. She gave that up to compete with the team.

“They almost killed me the first time we touched the slug,” she said, referring to what is also called the worm, a 17-foot-long cylindrical sack that weighs 435 pounds.

It was the first day of training for Regionals. She was the only one who’d never worked with the worm before.

“The first rep we did … we flipped it onto Kelly,” said John Birkmeier, a returning athlete who describes his athletic background as nonexistent—he was a skater boy. Not the flat-brimmed hat kind, more the long-haired surfer kind. He also did competitive sailing.

“I got talked into buying a Groupon,” he explained, and he and a few friends dropped into a CrossFit box. “I got my ass kicked for a month and I looked at myself in the mirror and I said, ‘I’m going to get really good at this.’”

A few minutes with the team and it’s clear they’re a bundle of laughs—despite near-death experiences with the worm.

“We don’t take each other too seriously,” said John Carter, an Army veteran and former wrestler who also grew up playing baseball. Carter got into CrossFit in 2011 while he was in the service, stationed in Colorado Springs. He’s been at Omnia since the end of 2015.

“We don’t stress out a lot,” he said. “We’re pretty cohesive. We’re really good at communication.”

“We laugh,” Birkmeier added. “We’re constantly making fun of each other.”

“We’re proud of being a homegrown gym, too,” Carter said. “A lot of gyms out there will—”

“Yeah, assemble a team. Fly people in from across the United States to be on a team. We’re all from the area.”

“It’s a hobby to us,” Birkmeier said.

A hobby that requires a lot of time, effort, and willpower. Or, for Jeff Schuette, just more of what he loves. The exercise physiologist who played football for Minnesota State Moorhead also coaches at Omnia a few hours each week.

“Everything I do is exercise related, one way or another,” he said. With the exception of reading. He takes pride in the fact that he, unlike the Johns, has actually read George R.R. Martin’s Game of Thrones.

“We’re kind of like a family, I guess,” he said. “We fight. We get along. For the most part, we don’t have any huge egos … We all kind of understand each other’s limits.”

“People underestimate us—I feel like they have, last year, this year,” Carter said. “But we like that. It gives us a little chip on our shoulder that we can use in competition.” 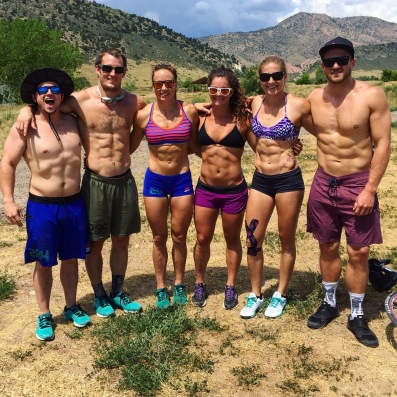 The team’s time to train together has been limited. Six people, each with their own full-time jobs, schedules, and commitments. They’ve had to be strategic about what they do when they’re together and what they do when training alone or in smaller groups.

Ashley Gaillot, a former volleyball player for St. Louis University, works as a firefighter in Thornton.

“I do 48 hours on, 96 off,” she said, “so when I’m at work, I can’t spend time here with the guys training … but my days off are really good ‘cause I can spend more time training.”

It was actually through firefighting that Gaillot got into CrossFit: one of her classmates at the academy coached at Omnia and invited her to try it out. She had familiarity with some of the movements, but not the barbell work. That was almost three years ago.

“The learning curve for the Olympic lifts is so huge,” said Sarah Manuel, the sixth member of the team, “and everybody feels like a baby deer for like a year, until they actually learn them.”

Manuel did track and field at Colorado State University and didn’t start CrossFit until she moved to Denver after college. Manuel remembers the first time she snatched 120 pounds and how heavy it felt. Now, she warms up with that weight.

Looking back at last year’s Games, the returners recalled a few favorite moments. There was the time Carter’s calf cramped up and he couldn’t keep running, so they threw him on the litter that they were supposed to carry a teammate on anyway. Then there was the swim-and-run in the Pacific.

“We’re a landlocked state, and we got fourth [place],” Manuel said.

400 meters: swim 300, run the last hundred. In pairs. Cross the finish line together, all six holding hands. Birkmeier and Schuette were the last pair to go.

Manuel saw Birkmeier come out of the water and Rich Froning pop his head out right after him.

“Birk is half dead and we’re dragging him across the finish line, trying to run as fast as we can,” she said, “and Rich Froning’s team is also half dead.”

The 2017 Games are this week, August 3-6, in Madison, Wisconsin. The team is gearing up and ready, but they’re not exactly sure what to expect other than that, as Berkmeier said, “It’s gonna hurt.”

Regionals this year, they agree, was harder than last year. They knew they had the ability to get to the Games, but they had to dig deep and fight hard.

“CrossFit is so definite and indefinite at the same time,” Manuel said. “You can train every energy system, every movement pattern, and then you can think, ‘Okay, what kind of weird shit can they throw in this week or this year?’ And it shows up.”

“I’m looking forward to seeing how well we can stack up against other teams,” Carter said, “after being together for a year and having the experience of not being a rookie team like we were last year.”

“I think we’ll be more consistent across the board,” Schuette said. “I just think experience pays off … and we’ll just carry Kelly through.” He tossed a joking look to Stone.

In a few days, they’ll know for sure.

Know a Denver-area CrossFit story that needs to be told? Share it with us.